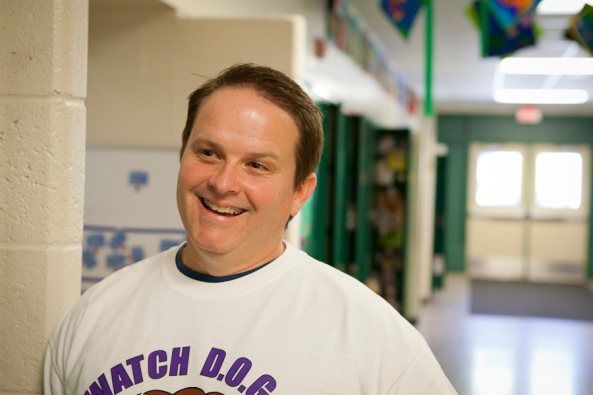 When Henry Diaz first heard about Watch D.O.G.s it was in a gymnasium filled with dads wanting to make a difference. Having moved to Michigan recently from another state with poor public schools and lackluster parental involvement, he was awed by the sight of a hundred fathers eagerly signing up to give away their time for free.

Watch D.O.G.S. was officially unveiled this past October by a group of parents who wanted to impact the lives of students by increasing the number of male role models at school. They kept it simple: come for pizza, learn about the program, sign up to help.  In one night nearly two dozen dads declared themselves Watch D.O.G.S., and in the coming weeks more names came rolling in. To date over 48 fathers have scrawled their name on the calendar declaring, “I’ll be there.”

Watch D.O.G.S. commit to an entire day monitoring the halls, offering one-on-one assistance to students, eating lunch with a table of new faces, playing soccer at recess, and stepping in to help whenever extra hands are needed. Principal Bergeon makes a point to schedule the dads in their own children’s classrooms as well as giving them opportunities to impact lives in other areas. 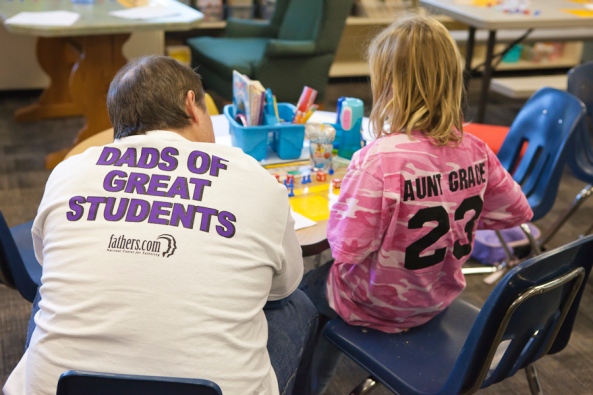 Mr. Diaz shared that it was so interesting to see the different learning styles in kids, noting that the “hands-on equations” being tackled in one of the classrooms made math so much easier. “I wish I would have learned this way!” he confessed.

Henry was impressed with the program from the start, but being in the school and walking the halls solidified his commitment. He walked with confidence and kindness, high-fiving his daughters’ friends and calling them by name. Every young face that met his broke into a smile and excitedly said, “Hi Mr. Diaz!”

“In this particular school–the kids are very well behaved. There are lots of visual clues and verbal reminders which are so helpful. Students seem to police themselves. It’s been great. I’ll definitely be back!”

Watch D.O.G.S. know that giving up a day at work doesn’t come without a price. They know that playing kickball at recess might result in dusty shoes; lunch in the cafeteria might mean giving up Starbucks or hot soup at Panera.

But they also recognize that it means being a friend; talking to a child who’s waiting to be noticed. It means showing love when you don’t have to; extending kindness to a room full of little strangers. It means being a hero to your own kids just because you’re there.

Is there any better way to make a difference?

To learn more about this national program, visit www.fathers.com. Ask your parent club how you can start one at your school, or if you’re a Pinewood Elementary dad, contact the office to sign up.