Mr. Fales holds Jenison’s answer to the famous “I (heart) NY” shirts found throughout Manhattan. Students wore these to be easily spotted while in the city.

I think we’d all agree that reading about something in a book can open our minds to history and truth, just as seeing pictures on a page can convey lessons not easily captured in words.

But actually walking the cobblestone streets of Philadelphia once traversed by Benjamin Franklin or strolling through Minute Men National Park is a different kind of education entirely.

The past that was once trapped in a 2D reality suddenly leaps from being merely a textbook concept and becomes surprisingly real:

Battlefields in Gettysburg become more than grass and dirt and shadows; they are now the hallowed grounds that cradle the souls of so many.

Fenway Park becomes more than a collection of bleachers. In fact, it still echoes with the crack of Dick Radatz’ bat.

The 9/11 Memorial in New York City is a silent capsule amidst honking taxis and the clamor of life in Manhattan. It becomes more than a symbol. It is sacred.

This June, 107 Jenison Junior High students stepped through time by joining the annual East Coast Trip organized by Mr. Kevin Fales. This group, JJHS’ largest in their five years of traveling, boarded three motorcoaches on June 8 and dove headlong into a seven-day trek that would take them to places such as:

Mr. Fales shared that it’s “…a cool experience to be able to take kids to the historical places that we’ve been studying all year; to actually be able to see the Declaration of Independence or walk the grounds at Gettysburg is so awesome.”

Students on the trip pay a flat fee to Countryside Tours which covers the cost of the entire trip, all hotels, and all food (except for two meals). Students are left to cover only the souvenirs they may wish to purchase.

Of course the trip can’t be quantified as easily as assigning a price tag and discussing details like hotels and food. To the kids on the buses that drove East, there were moments and memories that won’t register on an itinerary or be reflected in a price tag, like when a student looked at Mr. Fales (while in Canada) and said,

“I can’t believe I am in another country; I have never left Michigan.”
Those are the moments when eyes are opened and lives are changed.
Hearts bloom and school is never the same again. 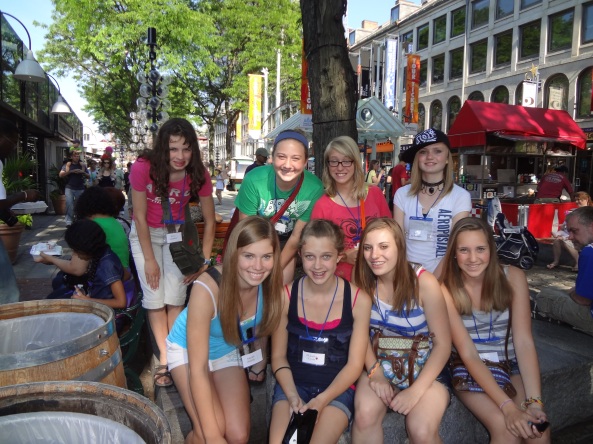 Thank you to Mr. Kevin Fales for his hours of dedicated planning and for spearheading this wonderful trip! We’re proud to have Jenison represented in some of our nation’s more historic locations!