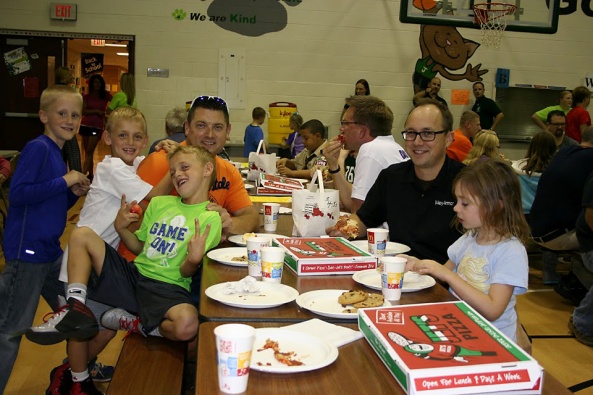 The amazing smell of pizza was in the air but the real stars of the evening at Sandy Hill last Tuesday were the Dads!  About 50 dads were there with their sons and daughters to learn about and sign up to be Watch Dog Dads for the school year.

Watch Dog Dads is a nationwide program from the National Center for Fathering.  It is open to any adult male [not just dads!] with a student at Sandy Hill who is willing to spend a whole school day helping in classrooms, monitoring the parking lot and property, eating hot lunch in the cafeteria, reading with students, playing at recess and being a good role model for all of the students.

This will mark the third year for the popular program at Sandy Hill but it began in Jenison at Pinewood and is now utilized across the Jenison Elementary schools.  “It started with us wanting to get dads involved and it’s a great opportunity for dads to be positive presence in the building. Typically, the perception is when dads come to the school it’s because something is wrong but we wanted to eliminate that.”  — Jonathan Mroz, Sandy Hill Principal

One of the unique features of this program is that participating dads don’t just spend the day with their own child, they are utilized throughout the building for the day. “It is a positive community outreach so we want the kids who don’t have dads or positive role models to come in and be seen all over”, says teacher Stacey Harrig.

Brian Bydalek is a veteran Watch Dog Dad, participating for his third year because “it’s important to be part of the kids lives, be a role model, know the atmosphere of their day and it’s a strong relationship builder.”  Sam & Jack Bydalek, both 2nd graders, love having their dad in the building to play with at recess and work on math:  ‘It’s fun!”

First time Watch Dog Dad, Chad Sarber, attended the event with his Kindergarten son, Liam.  Chad decided to come to the event in order to get more involved at Sandy Hill as their other children attend Bauerwood.  “I think it’s an obligation as a dad.  You work all day and you want to spend some time with your kids and see what they get to do during their day.  There’s so many wonderful teachers here and it’s a chance to put myself in their shoes and give back a little.”

“For my students it’s all about seeing another community member, it’s about somebody that’s supporting them whether it’s on the playground or working in a small group for math.  I think it’s comforting for them to see these father figures in the building.  This gets them in the door but it opens them up to other things — fundraising, staff basketball games, fulfilling needs in a classroom — now they’re becoming involved which is such a needed piece in our building.”

“We see a direct correlation with how well  [students] are achieving in school and the amount of time their parents are spending with them.” — Mr. Mroz

Dads work on filling up the calendar for the year!

Many thanks to the Sandy Hill Watch Dog Dads and all of the Watch Dogs throughout Jenison!  We know that sacrificing a day at work to spend with our students isn’t always easy and we see the difference you’re making!

If you’d like to sign up for the Watch Dog Dad program [and remember, it’s open to any adult male with a student in the elementary school] please contact your school office.