The beginning of October brought a community favorite back to Jenison:  The Missoula Children’s Theatre! Our K — 12 students were invited to audition and actors were chosen to fill roles in the MCT version of the classic story of Robin Hood.

The Missoula Children’s Theatre has been coming to Jenison for twenty years and their mission is develop life skills through participation in the performing arts. To accomplish this goal their 25 – 45, two-person teams travel each week to a different city and work with kids to perform one of over thirty unique shows.  They bring everything they need to put on a show including the set, lights, scripts, costumes, props and makeup. There are only five rehearsals and then the group performs for an audience.  For their week with Jenison they had 60 actors from every grade and were especially encouraged by the number of older students who were involved.

Jeremy Cunningham has been working and traveling with the MCT for eight years and for this production he took on the role of Sherwood [of the Forest] while his wife and teammate, Jenny, acted as Director.  Jeremy was impressed with the Jenison Center for the Arts and had faith that the students could pull off a terrific show:  “The kids are great; they’re doing a really good job.”

The rehearsal was carefully executed from giving the youngest students early time to practice their lines and singing to a careful instruction on the purpose of each prop and the responsibilities that come with them.  Both Jenny and Jeremy kept the crowd attentive and interested as they explained each item to the eager crowd.

Missoula Children’s Theatre puts their unique spin on classic stories to allow as many students as possible to participate. In the MCT version of Robin Hood there is a Merry Band filled with bad actors who think they’re good which means these twelve students did their very best to be bad.  One of those is Band member Trevor Kohley [Senior] who has performed with the MCT every year and he is currently working on the Jenison production of Charlotte’s Web which will be held this November and he sees himself pursuing musical theatre after high school.

Sixth grader, Pateyn Bounds eagerly explained that this is her first year in Jenison after moving from Memphis, TN and she thinks the play is ‘excellent” and has really liked being involved in something new.  Seventh grader, Gabe “Blaze” Herdegen plays a comedian in the Merry Band and likes theatre because he “likes being able to step into someone else’s shoes and see how they think.”  He thinks that acting is a great way to combine all the activities he loves such as gymnastic, cheerleading and singing. 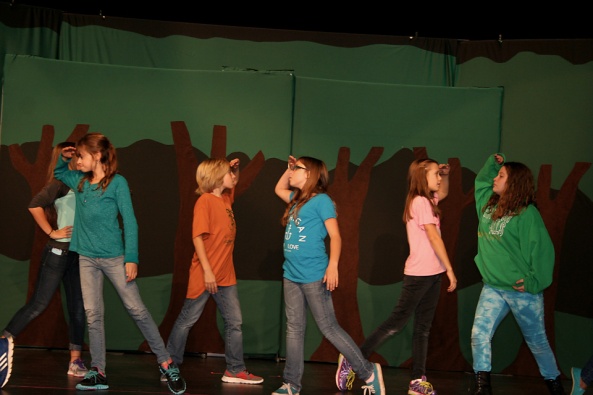 The Missoula Children’s Theatre is close to Jenison Theatre Director, Todd Avery’s heart as it is how he and his wife, Penny, spent the first two years of their marriage — traveling with the company and teaching students the important skills of performance that go well beyond the stage.  “It’s been a great way to help us get elementary students in particular involved but it’s a great place for high school and junior high students as well. 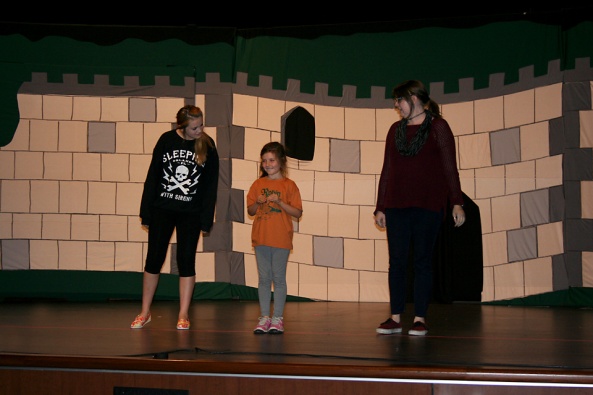 The Merry Maids and one little skunk! [Don’t worry! There are more!]

Jeremy Cunningham of MCT plays Sherwood [of the Forest].

Sherwood [of the Forest] and his many skunks!

The skunks wait patiently for their turn on stage.

Congratulations to all of the Robin Hood actors!  Your hard work has paid off and made us proud!