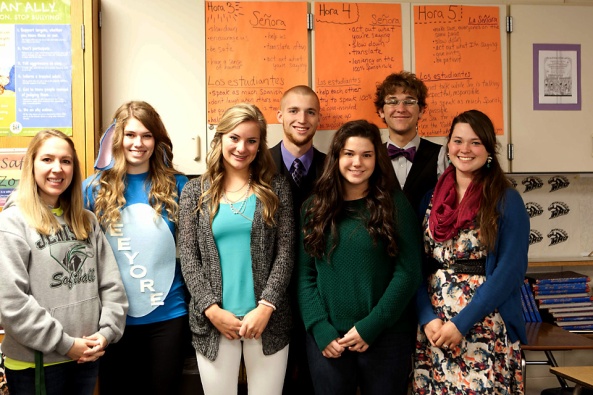 Ms Remley [far left] and some of her AP Spanish Students [note: on Halloween]

Getting critical native-language practice in Jenison isn’t always easy so this summer High School Spanish teacher, Lindsey Remley, got a little creative.  Previous to her time in Jenison she worked in the neighboring district of Kelloggsville and she reached out to ELL Teacher [English Language Learning] and former co-worker, Susan Faulk, with an idea.

What if AP Spanish students from Jenison worked alongside and tutored ESL High School students from Kelloggsville as they tackle their subjects in a second language? Susan loved the idea and they quickly began planning.  Says, Ms Faulk, “Her [Lindsey’s] AP Spanish students need to practice their Spanish with native speakers and my Spanish-speaking immigrant students need academic support and would greatly benefit from instruction or tutoring in Spanish.  It is a win-win for all students involved.”

This isn’t the first time Ms. Remley has used her language skills to serve the Wyoming community.  When she was a teacher in the district she translated at Parent-Teacher Conferences, meetings between the Principal and parents and helping a woman who sold food out of her home.  “I was part of the community, helping to translate and being a liaison for parents.”  Knowing first-hand the value of service alongside native speakers and keeping in mind that her Advanced Placement students want to use Spanish as an integral part of their future careers, Ms Remley knew this idea would be an exciting opportunity.

Ms Faulk’s position in Kelloggsville is to work with recent immigrant students [and their families] who are welcomed into the public school system but expected to keep pace with the grade level of their homeland – in a second language.  Biology, Algebra, US History and other subjects take on a new level of difficulty when the language isn’t your own,

So, beginning just last month, once a week Jenison AP Spanish students drive to Kelloggsville High School and spend one hour tutoring the English Learners in their subjects.  As a Service Learning Project, the class is always reflecting on how the process is going, how can it be made better, asking “what did you talk about” and even finding an online Spanish-English math dictionary for those tricky algebraic terms.  “After one week of tutoring, one of my students said, “I want to go every week.” They are learning how good it feels to serve the community and it’s amazing.”

And the students on both sides of the experience agree.

Ninoshka from Kelloggsville said,  “I think that they are doing their best.  All of us understand everything that they said.  In case one of us doesn’t understand they tried to explain in other forms.  They are awesome people and very smart.  They help us a lot and sometimes we help them with their Spanish.”

“I am sincerely grateful to them.  They help us in our duties in English and we teach them our language.  I thank you all, really.” -Jessica

While our AP students might be naturally academically minded, they are also aware of the importance of serving and learning from others.  Jenison Senior, Justin Camiler says, “It’s an awesome experience volunteering and helping people.  And the Spanish that you learn is really helpful.”

“I like the challenge. The first time I was asked “why is “fence” pronounced the way “fence”” is?  And I had to think of a way to explain that in Spanish.” says Senior Brett Clark.

“I am so thankful to Lindsey Remley that she thought of this partnership.  My English Learners benefit greatly because they get academic tutoring in their native language.  The Jenison students benefit because they get an opportunity to practice Spanish with native speakers.  More than that, however, our students get to see into each others’ worlds and build relationships that bridge those worlds.” – Susan, Faulk