Last Thursday the teachers of Pinewood, Sandy Hill and the ECC met on the hard wood for a [mostly] friendly game of basketball, all in the name of fun and fundraising for the A-T Children’s Project, a cause very close to the Jenison family.

On November 4 the entire Jenison community lost Olivia Veldink, a 7th grader at Jenison Junior High, sister of Abby and Kate and daughter of Mary and Dave.  Olivia lived with a rare disease known as A-T or Ataxia-Telangiectasia but was never without her bright and contagious smile.

The basketball game is not only an opportunity for families to come together in the name of competition but also to raise money towards A-T research.  Laurie Takens, Pinewood Administrative Assistant and fundraising organizer, says the early totals show over $6000 has been collected which is already  $2000 more than last year! 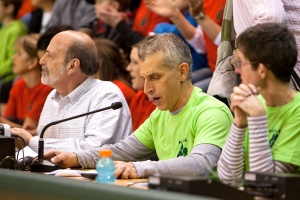 Eric Zane, co-host of the Free Beer & Hot Wings show on 97.9 and Jenison parent was happy to provide his announcing skills to the booth alongside Brian Gray, Jr High Psychologist. Eric developed a relationship with the Veldink’s years ago when his own kids had Mrs. Veldink as their teacher and he regularly uses his national platform to bring awareness and opportunities for fundraising for A-T.  He also developed a special bond with Livi as his partner in many appearances at the Reeds Lake Triathlon.  “From a personal standpoint, my wife and I and the relationship with Mary and Dave and the family, the Pinewood community, it means everything.  These are the things that matter.”

Pinewood Principal, Rachael Postle-Brown, was hoping that the game was “a chance for Pinewood, Sandy Hill and ECC kids to come out and see their teachers having fun, be able to interact with other families but also to celebrate Livi’s life and raise as much as we can for A-T.”  They advertised in the Advance newspaper, sent a parent email, included the event in their newsletter and invited Livi’s 7th grade class.  The gym was packed full of supporters from all three schools ready for a night of celebration. 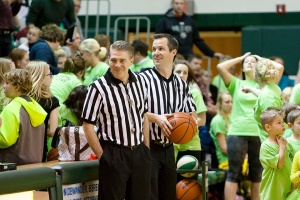 For their part, the teachers brought the fun — and some mad basketball skills, of course!  They played a quarter in costumes, they played with their opposite hand and using a tiny basketball.  Thankfully, they had students on hand to take the free throws on their behalf when referees Tom TenBrink and High School Principal Brandon Graham saw fit to call a foul.  And once again, the breaks between quarters and halftime were filled with entertainment provided by the ECC student dancers, audience participation with the Wave, Chicken Dance and YMCA and even a staff dance routine.  To put a cap on this amazing evening the whole stadium sang “Let it Go” from the Frozen soundtrack.

The Jenison family is proud to stand beside the Veldink’s and continue to celebrate Livi’s life and fight for a cure for A-T.  Thank you to all who attended, participated, cheered, sang, danced and donated!

“We would like to thank our Pinewood family and our friends from Sandy Hill and the ECC for coming out to the Hoops for LIvi game this past Thursday.

Dave, Abby, Kate and I would thank you for giving of your time and money to support the A-T Children’s Project, for all of your thoughts and prayers, and for walking beside us as we mourn the loss of Livi.  Jenison might not have the fanciest restaurants or nicest downtown, but we have something that many other communities don’t have: We have people that care for one another, walk with one another through good times and bad, and support one another.We are blessed to live in the Jenison community.
Livi would have loved this event.  Thank you for honoring her memory. ”  — Mary Veldink

The guy from Duck Dynasty vs a banana. Very tough call. 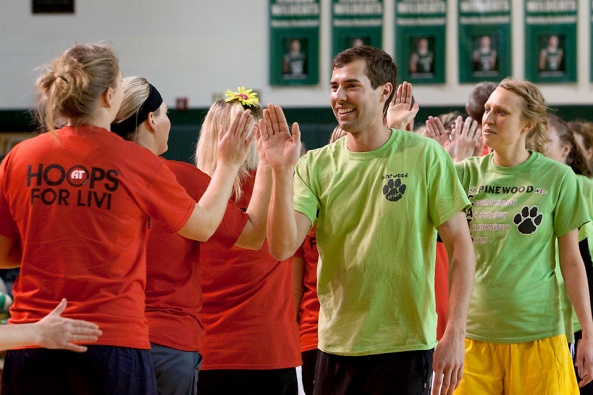 Good sportsmanship is key in any game! 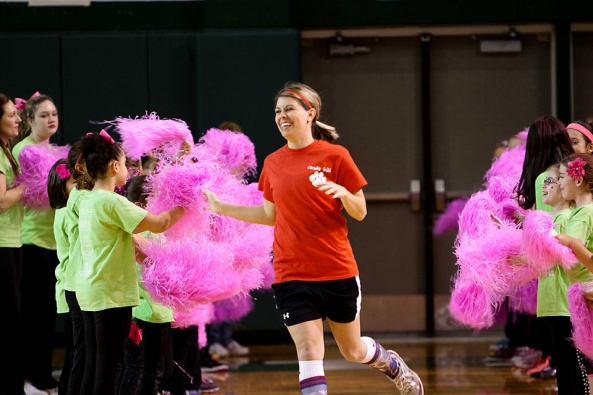 C’mon! It’s easy to plan in an angel costume! Maybe not the soft serve ice cream though…

Volunteers cruising through the crowd taking donations! Impossible to say “no” to these faces! 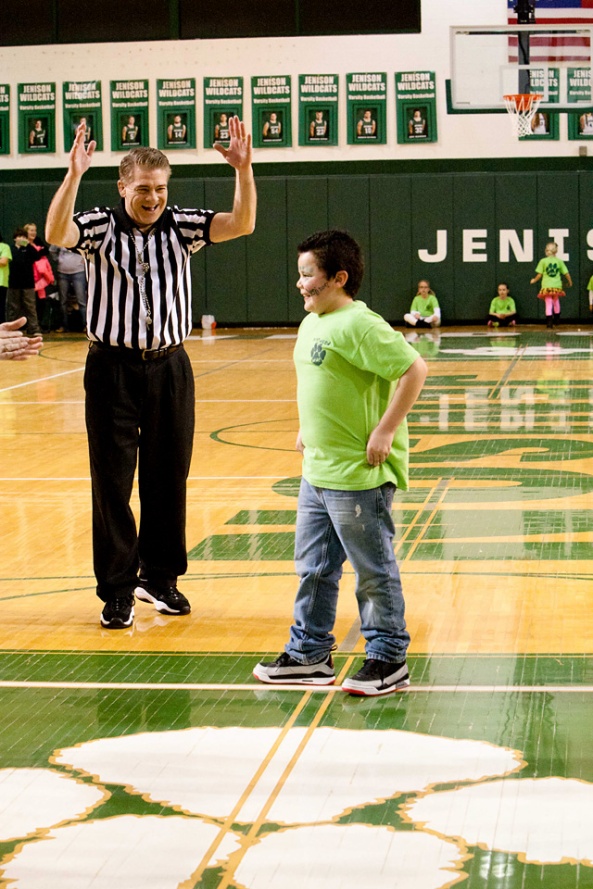 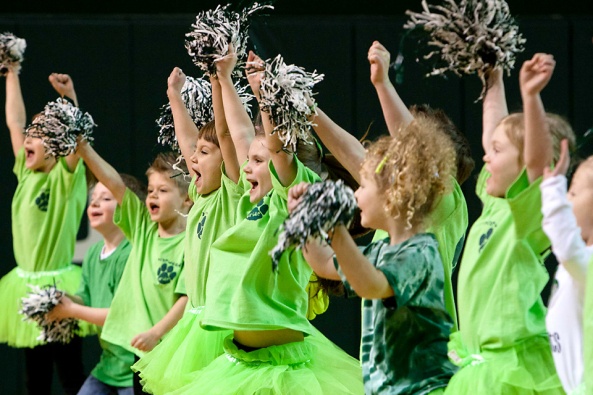 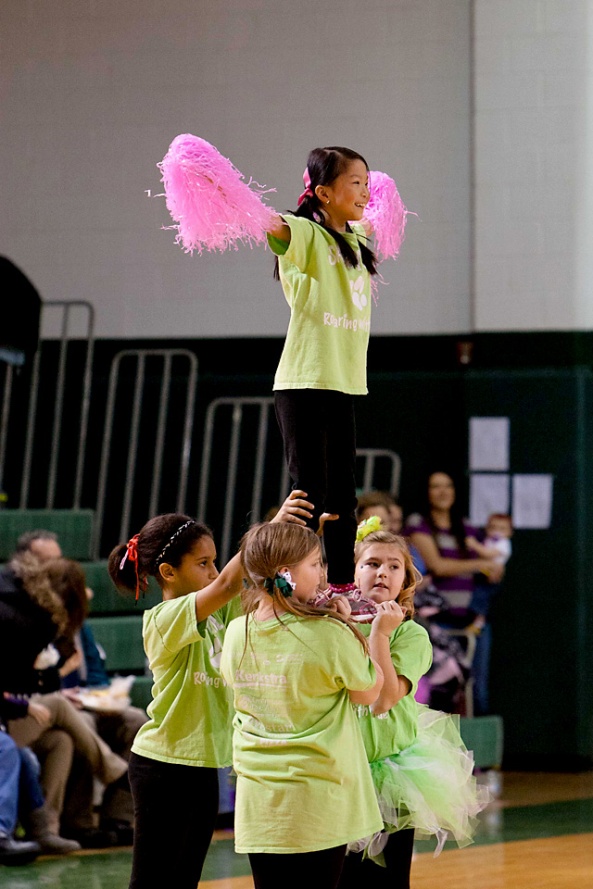 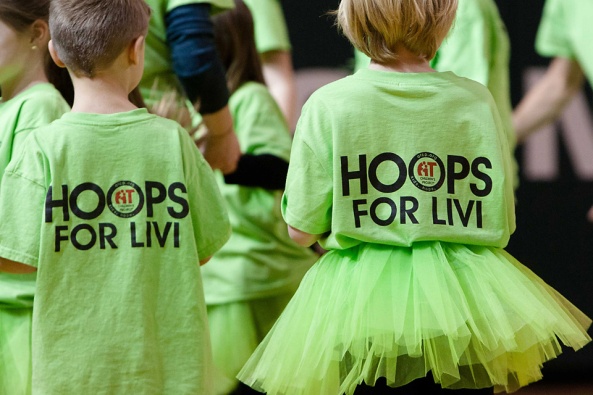