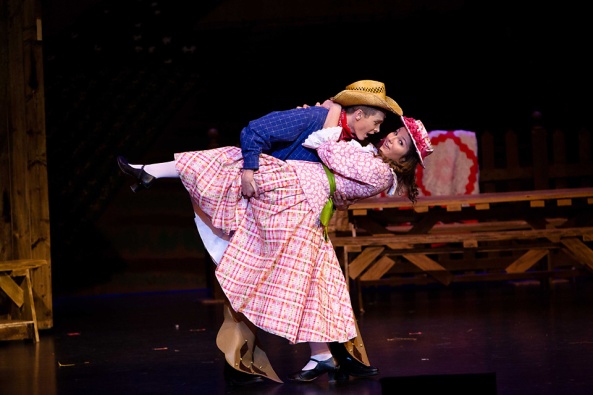 Once again, the Jenison High School Thespians wowed the community with their talents at this year’s High School Musical:  Oklahoma!  While many younger people may not be familiar with the story of this beloved musical, it was written by Rodgers and Hammerstein and first debuted on Broadway in 1943.  It is set in the Oklahoma Territory in 1906 and tells the story of cowboy Curly McLain and his romance with farm girl Laurey Williams. A secondary romance features cowboy Will Parker and his flirtatious fiancée, Ado Annie.  According to Director, Todd Avery, “This is such a great story with many fun characters and a musical score that is unmatched in American musical theatre history.  This was our first production in the JCA without any “gimmicks” or special effects.  All we had was a wonderful story.  We worked very hard to create characters who were believable and engaging to our audience.”

Hundreds of students are involved in these annual productions and include the pit orchestra, sound and lighting teams, set construction and design, makeup artists and hair stylists, stage crew and, of course, the actors.  Says Mr Avery, “I am always inspired by my students.  They are eager to learn and try new things.  Aside from myself, some parent assistance, our costume designer, Nancy Korth, and our musical directors, Kim Nagy, Diane Schrems, and Carol Johnson, our program is completely run by our students.  Under adult supervision and guidance, our students and their student crew leaders make costumes, build sets, find and make props, run the lights and design sound for every show.  There are very few theatre programs in Michigan, let alone the country, that can claim that their program is student centered.  My students and I take a great deal of pride in that.   Jenison students are always up to the challenge!“ 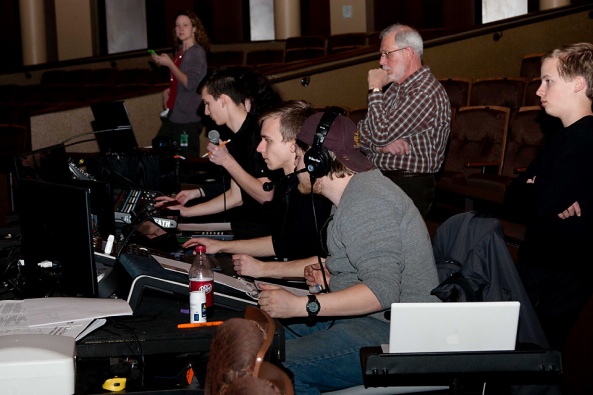 Senior, River Gibbs, served behind the scenes as Stage Manager for the tenth time with Oklahoma!  After working on The Wizard of Oz, River feels that every show is less technical but concedes that there are large set pieces to build, move and maneuver that pose their challenges.  River’s responsibilities as Stage Manager begin months before the show even starts rehearsals.  He reads and analyzes the script, creates a props list, set list and many “massive spreadsheets” for preparation.  During rehearsals he is facilitating scene changes, organizing crew leaders and communicating with the orchestra as the actors and musicians practice working together.  “I’ve learned more doing this than I will doing a lot of other things in life because you learn how to build, design, work with other people — you learn so many new skills.  I’ve started to learn how to read music too because I think that’s a really important skill for a stage manager to have, you get a little taste of a lot of things.”  River will take his passions for stage managing and the skills he’s learned at Jenison High School to pursue stage production and is thinking about attending Whittier College in Whittier, California where he was awarded a full scholarship.

Makenzie Schnieder, also a senior, may not be planning  a career of makeup and hair but she certainly knew how to lead her team of stylists as they prepared each actor for rehearsals and performances.  Carefully inspecting everyone’s work and offering suggestions and critique before approving them to hit the stage she says that becoming involved in the theatre program was “one of the best decisions” she ever made.  She served on the makeup team for five shows before stepping up to the role of Makeup Crew Leader for the past two shows.  “I was really inspired by our other crew leaders and I thought, “I want that to be me” so last year I worked really, really hard with the Crew Leader — I made sure I was always by her side, learning new techniques and I worked really hard to prove myself” and Mr Avery saw that hard work.  She loves to do “crazy makeup” and while Oklahoma! doesn’t provide a lot of opportunities for “crazy makeup” she is enthusiastic about creating a scar on one of the actors “which not everyone knows how to do”.  One of her main responsibilities is develop the character designs for all the actors, deciding how old they are, what their hairstyle and makeup will look like and while “this show isn’t as much about design as it is about what fits the character”, she is certainly passionate about her work.  She can also add “teacher” to her list of skills because once Makenzie designs the looks for the entire show she shows her team how to execute each style.

And no theatre production would be complete without sets and set design which is all lead under the careful eye of Junior Jason Jipping who acts as the Set Crew Leader for Oklahoma!  Jason has served on the set crew for three shows and this is his second turn as Crew Leader.  The responsibilities range from keeping everyone safe during construction and moving of the sets to staying on schedule to constructing the set elements from blue prints.  “We build the sets and make sure we’re working on not only the structure itself but looking at the fine details.”  Jason manages 7 — 10 crew members who are also in charge of moving set pieces at specific times and assigning crew members to very specific tasks during the show.  Being part of the show “was definitely worth the time.  I quit my job to do this and it was probably one of the best choices I’ve made.”

“We were very happy and proud to give back to our seniors at Wednesday nights’ performance.  It was amazing to see the house full of people laughing and singing along with us.  To see our actors interacting with them in the lobby after the show was something I will never forget.  Also, with the help of Carrie DeBruyn, we were able to honor the Jenison High School casts of OKLAHOMA! from 1970, 1977, and 1984.  It was incredible to see former cast members mingling with current cast members.  There was laughter and tears of joy as many mini – reunions took place throughout the lobby.  We are proud to be a part of the Jenison Community, grateful for our new home, and will continue to provide quality theatre experiences for all.”  — Mr Todd Avery

Congratulations to the entire Theatre team at Jenison High School!
Thank you for your incredibly hard work and dedication to giving your best each and every time! 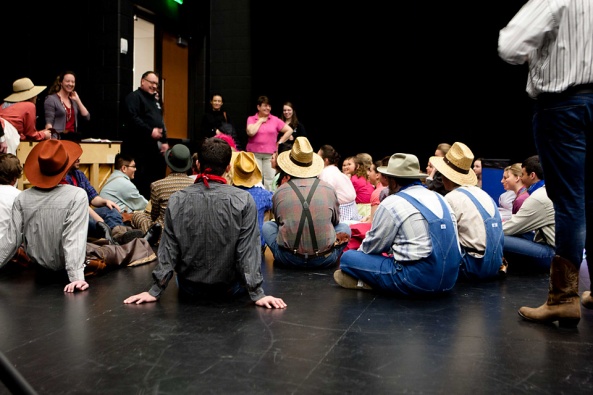 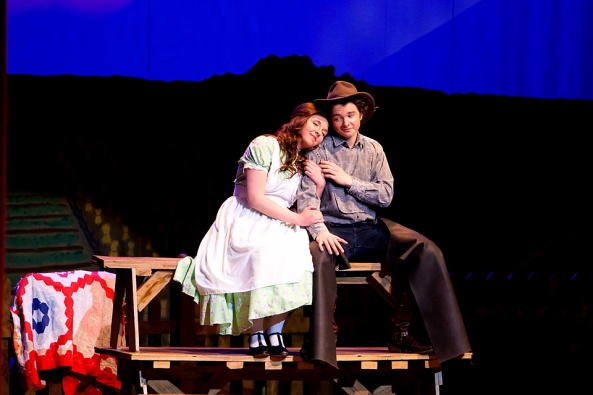 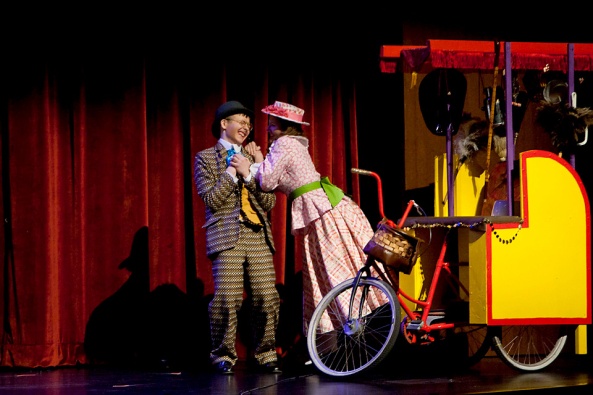 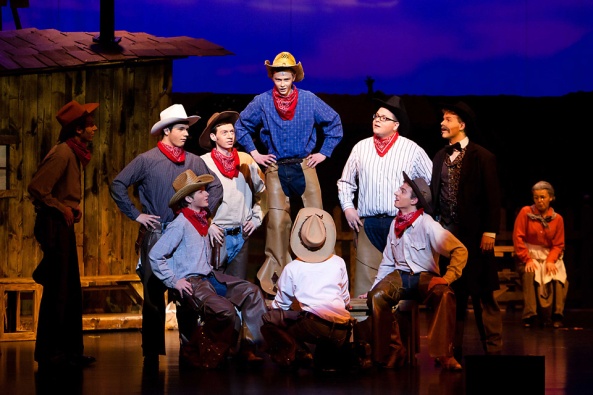 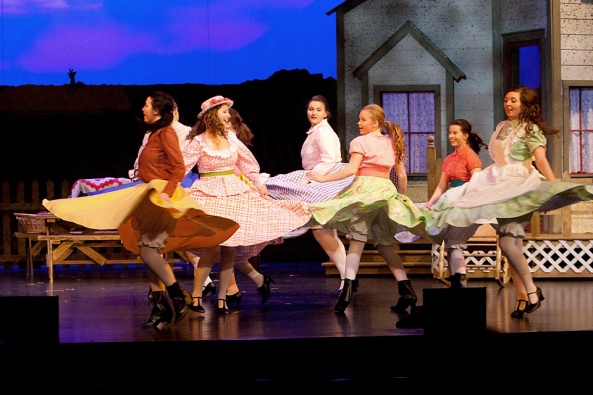