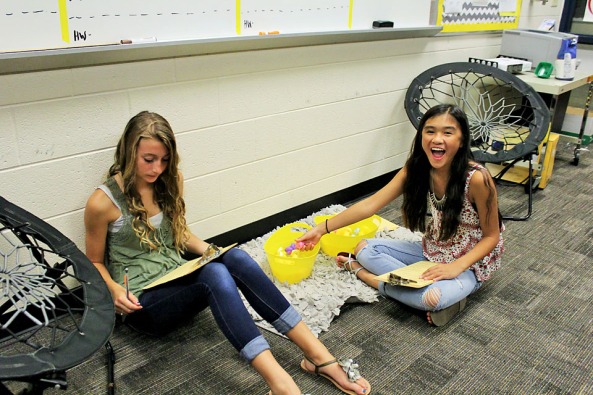 Jenison Junior High Math teacher, Lisa Douglass, wants her students to learn more than just math.  This year, she started off the school year motivated by her reading of books like “Teach Like a Pirate” and “Growth Mindset” she set out to capture students attention and imagination in a new way but also to answer their ubiquitous questioning, “Where will I use math in the real world?” 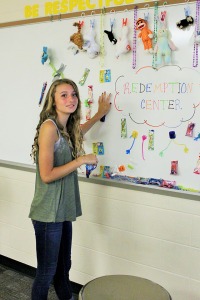 For the first day of school Lisa set up her classroom like a carnival complete with ring toss, duck pond and smash the cans. As the students made their way through the various stations they were learning about probability and statistics. The next day they were taken through a Black Friday shopping trip where they had to decide which store offered the best deal on an iphone, computer or digital camera, learning about percentages and rebates. Next, they had to consider what it would look like to get a summer job to pay for their school supplies and they learned how to factor in state and federal taxes, learning about minimum wage, as well as thinking through what qualified as a school supply. “It was interesting because at the end some of them would say, “Oh, maybe I don’t need five outfits, maybe I only need three. It was  interesting to see them adjust [their budgets] when they had to work the hours vs when mom or dad had to work the hours.”

Finally, students were asked to decide if Mrs. Douglass could get a self-sustaining fish tank for her classroom and how much would it cost up front as well as carrying costs such as electricity from the building, etc.  This final lesson was capped off with a field trip to Pet Smart where students not only learned about various kinds of fish suitable for this environment but, of course, all the costs involved in setting up a proper tank. 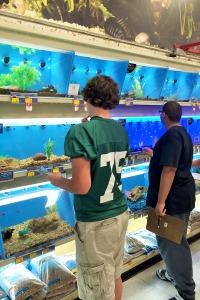 Once the students had their findings, they were were asked to draft a letter to Mrs. Douglass stating what the problem was, what research they did and their results and if she would or would not be able to buy that fish tank, just as an employer would ask and expect of an employee tasked with a project.

“I did that to really get their attention and show that you really do use math in real life.”

Future lessons include a field trip to a local restaurant where they will be given $10 each and need to factor in tax and gratuity [not using a calculator!]. Mrs. Douglass also hopes to include a Thanksgiving lesson where students are given a limited budget and are required to go to the grocery store and plan the Thanksgiving meal.

Modeling the idea that we need to move and reset our minds throughout the day to learn well, students are encouraged to get up and move during lessons, help themselves to the water station in the room, having choices, “preparing them for life in general with math skills”.

Mrs Douglass knows that her role is not only about math but so much more. “I get to impact 800 kids every day and how many people get to do that? Even just a smile in the hallway, saying “hi” to somebody is huge.”

Thank you Mrs Douglass for making math relevant and fun for our students!  Your willingness to go above and beyond for them is amazing!